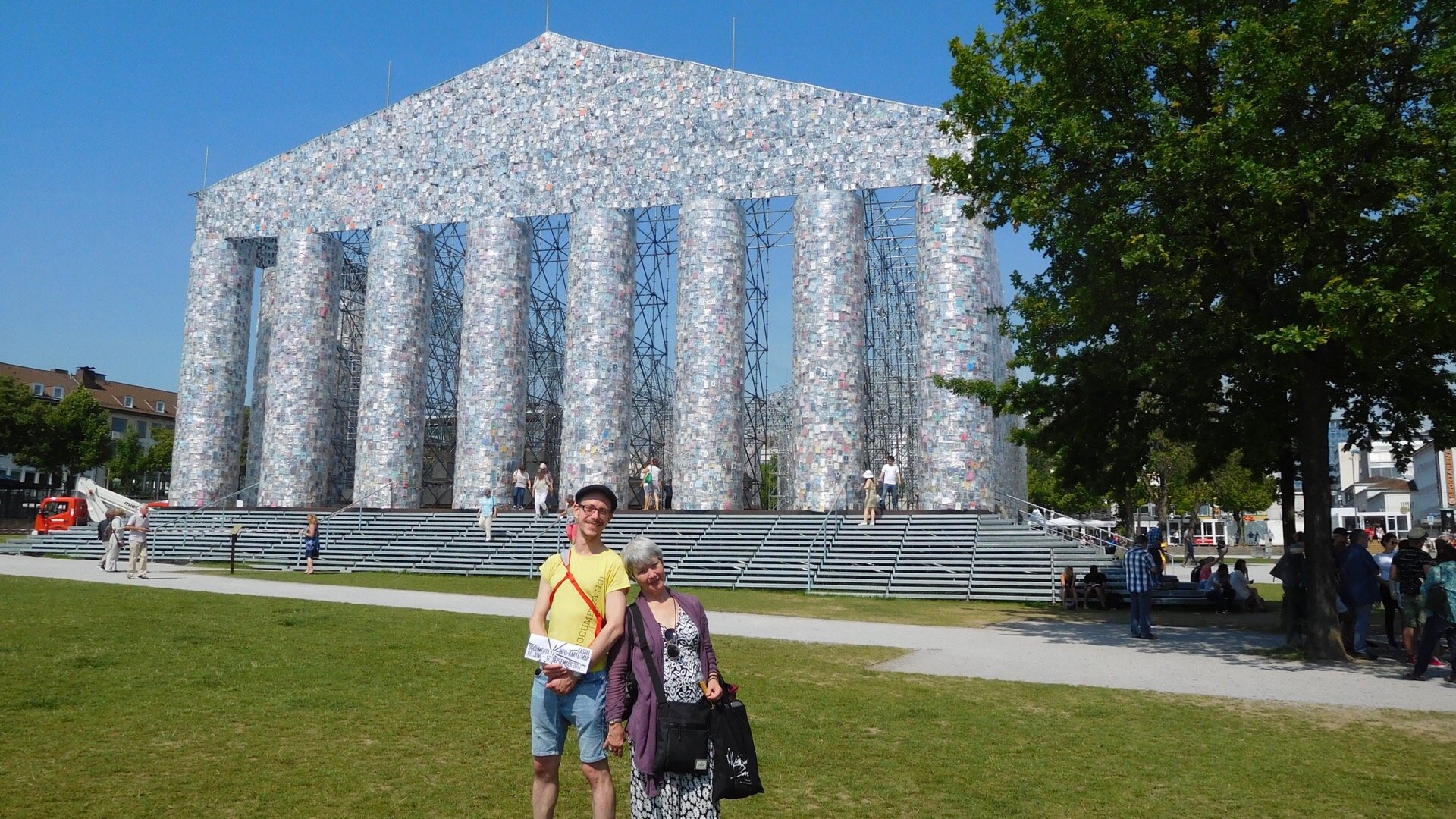 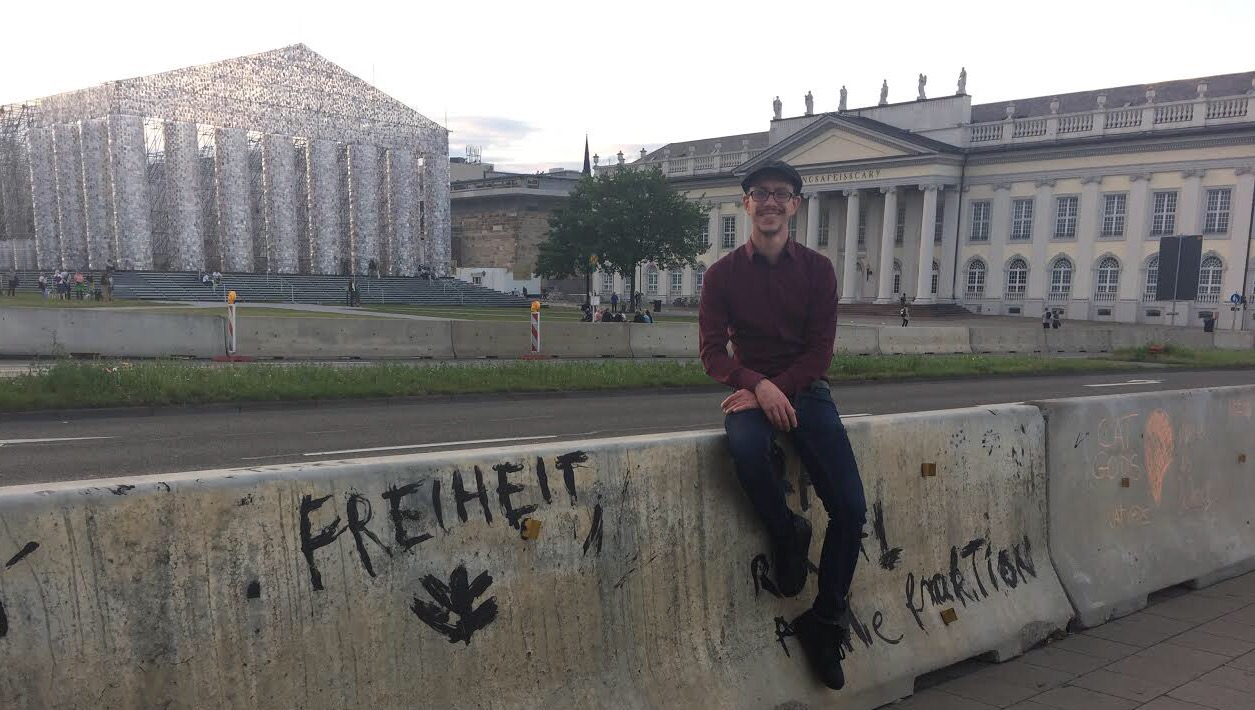 "documenta" is the probably biggest modern art exhibition. Every 5 years the city of Kassel in central Germany presents international artworks to give herself some importance which the city otherwise lacks. Here I list my personal favourite exhibits. My top 10 consists currently of 13 works.

This documenta 14 fascinated me for full 2 days from 10 to 19h in many of the exhibition venues. Who ever has the option to visit the Kassel part of the exhibition until 17 September should do so. I love the international and political diversity of presented artworks. Positive surprise was the quality of videos. I missed some of the more multi-media exhibits which I particularly enjoyed in documenta 13 of 2012. They combined projections, music and fixed materials and excited many and not just one sense at once. From a local I learned how earlier documenta exhibitions involved Kassel's citizens more as e.g. when Joseph Beuys as curator asked the citizens to finance one tree for each of a big pile of stone columns. Thanks to this art performance "Stadtverwaldung statt Stadtverwaltung" 7000 trees remain until today all over the city. 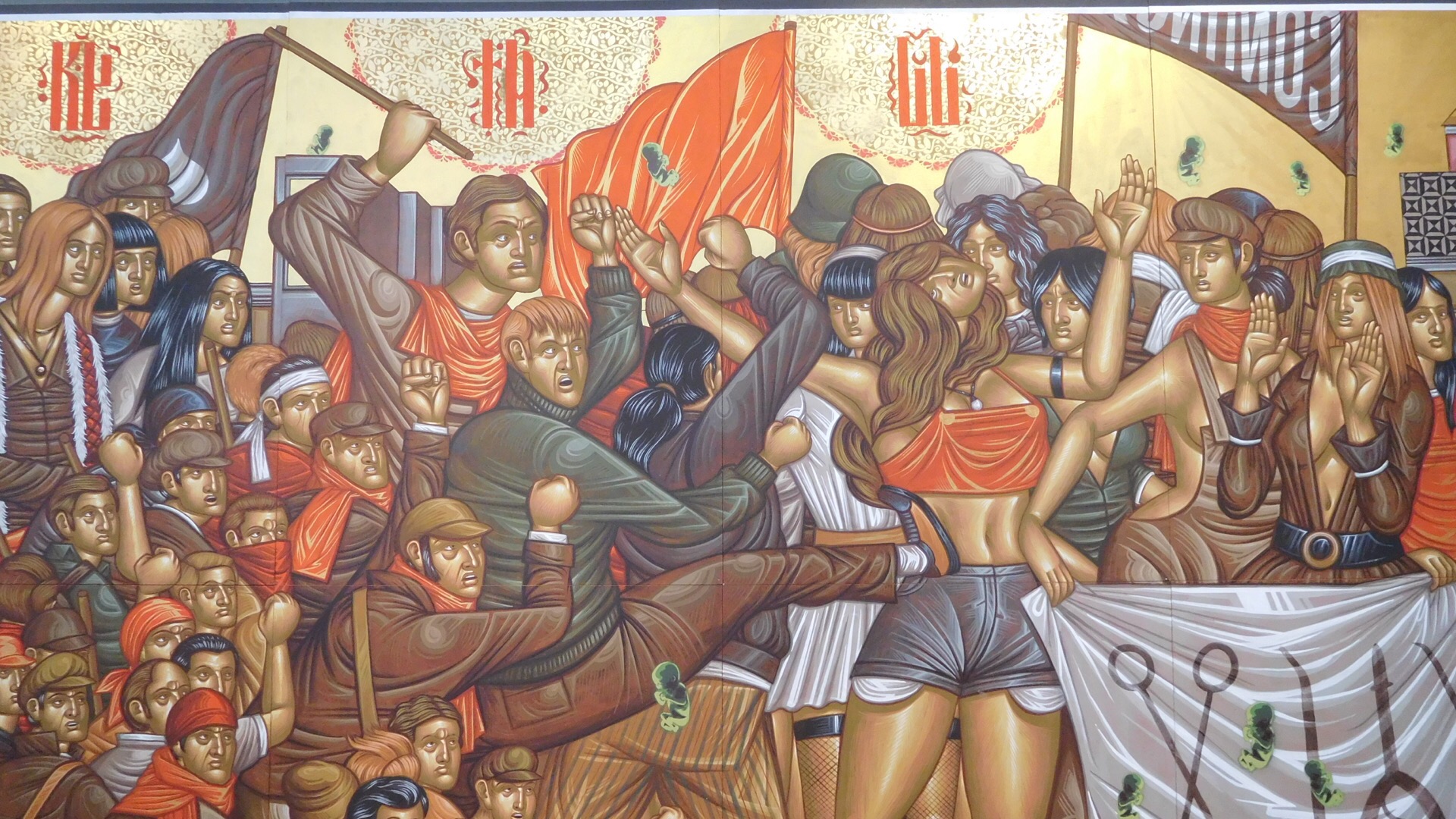 Stelios Faitakis: "Fortunately absurdity is lost (but they have hoped for much more) (2014)" in Fridericianum ground floor. The painting of acryl on MDF is done in the style of old Byzantine icons but shows the modern conflict on abortion. A group of women is holding a banner with instruments used, an angry man from the bigger opposing group kicks one woman in her belly. Green embryos float over the image. Icons often show martyrs who died for their faith. To show a woman in favour of abortion as a victim in Jesus pose seems to predict those who fight for the legalisation of abortion today will be the heros of tomorrow.

When the flood hits waiting people 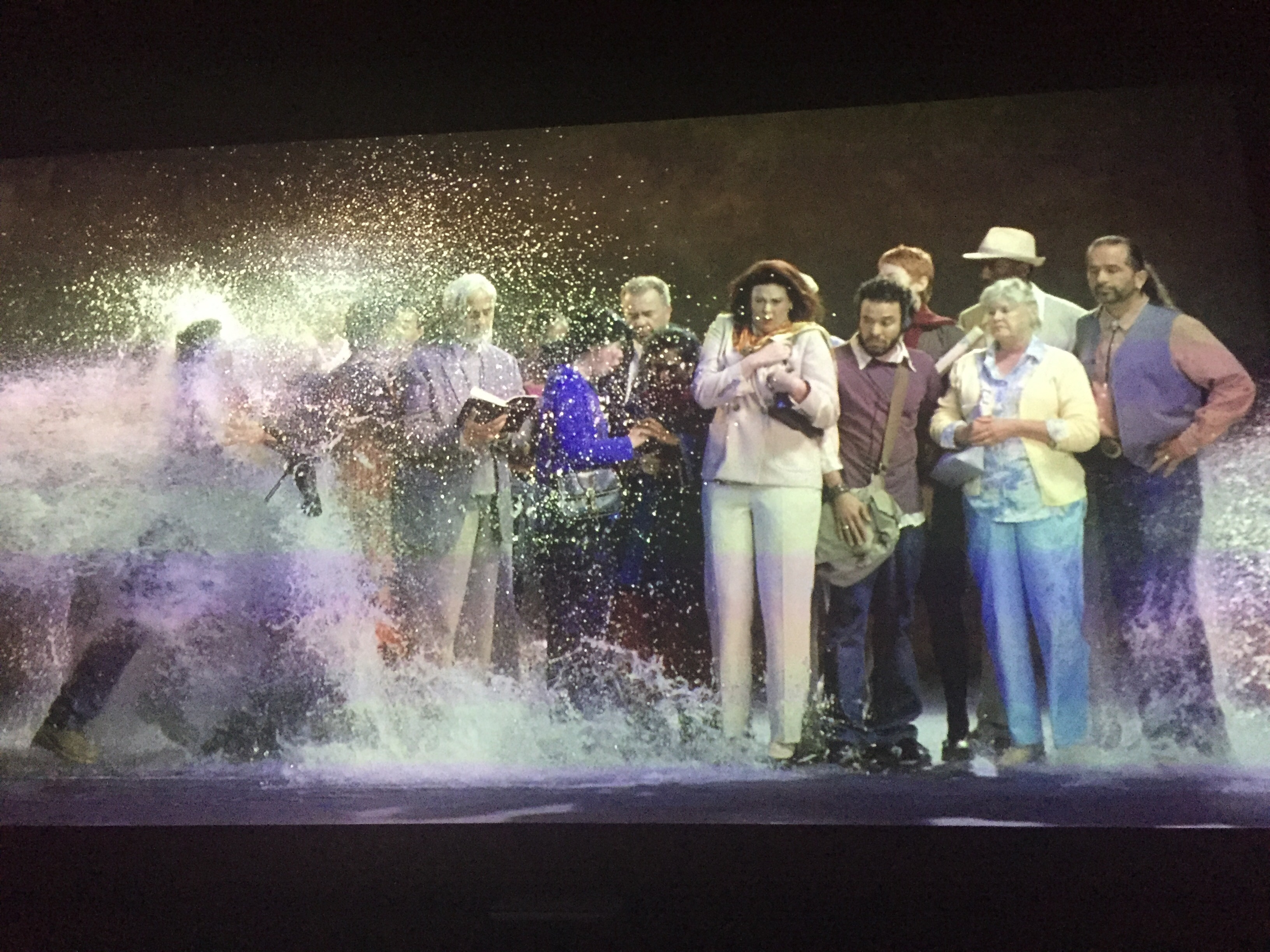 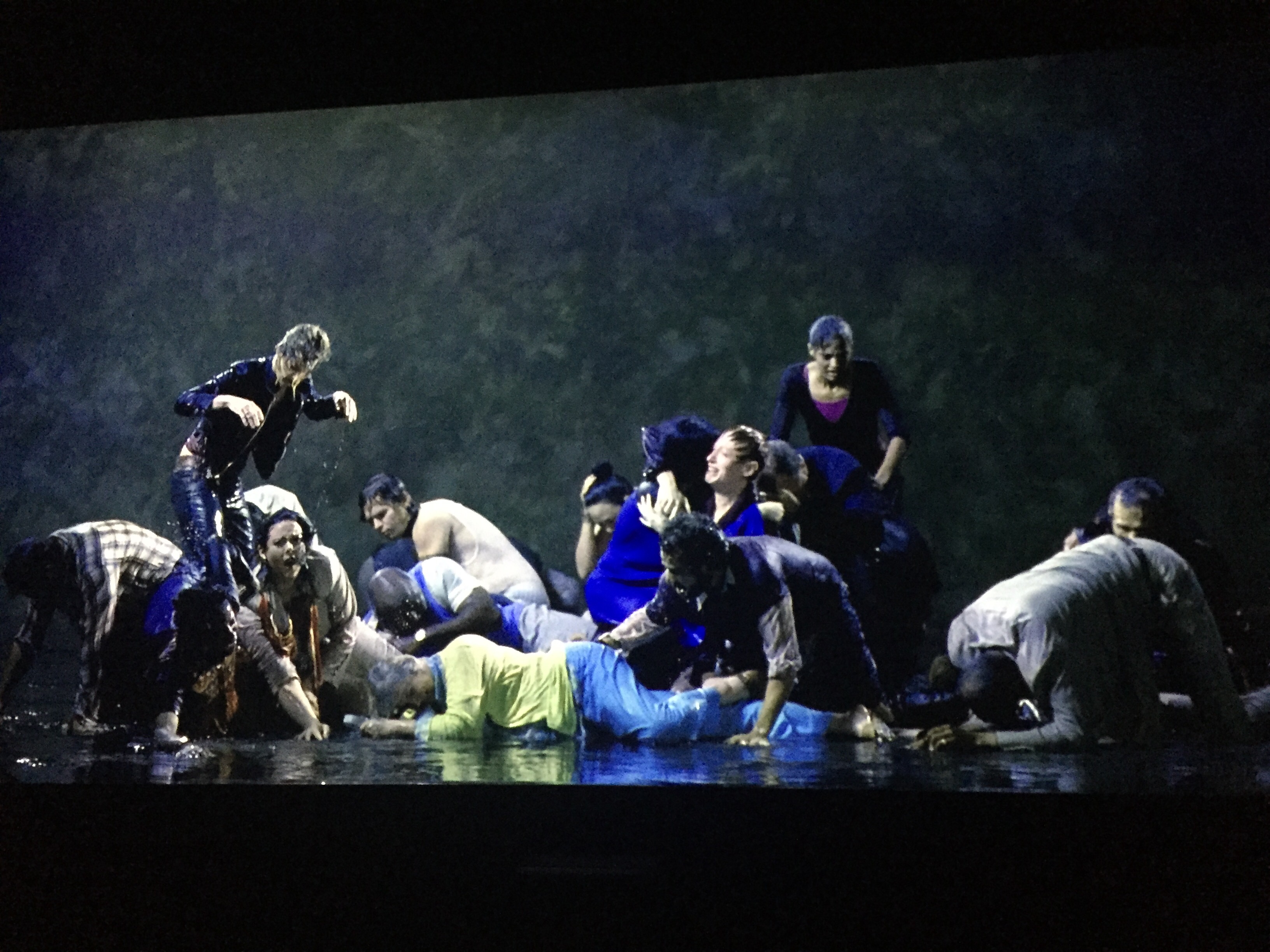 Bill Viola: "The Raft (2004)" in Fridericianum. Video installation of 10:30 min about a group of people waiting like at a bus stop when suddenly water floods in from right and left. The formerly serious looking people suddenly look wet and miserable. From the early distance some turn towards others to help, others are just too shocked. The video turns normal Westerners into people looking like refugees from a boat which drowned. In a time when too many call the influx of refugees a "flood", the video shows how a real flood looks like.

Temple of democracy made of forbidden books 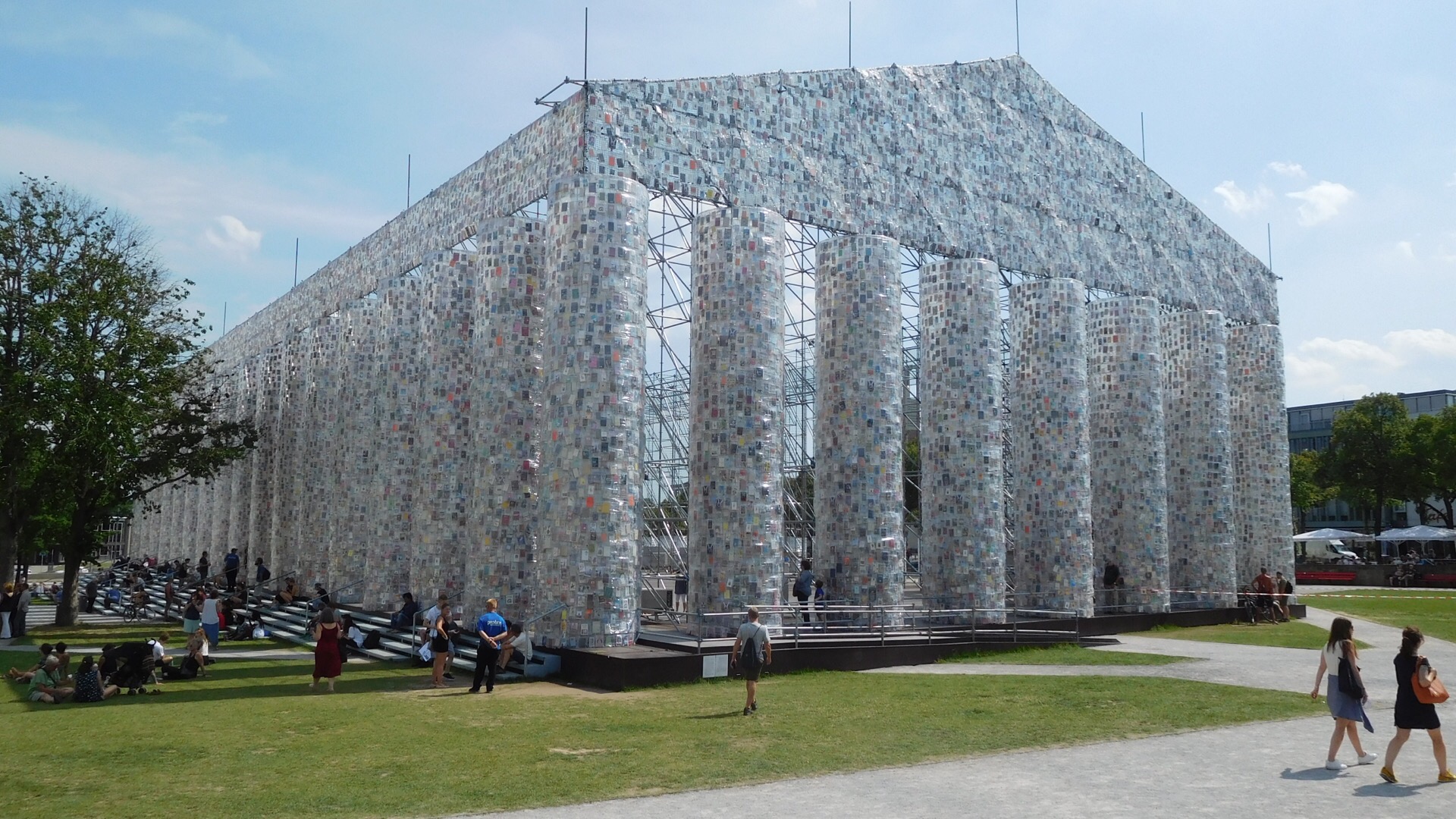 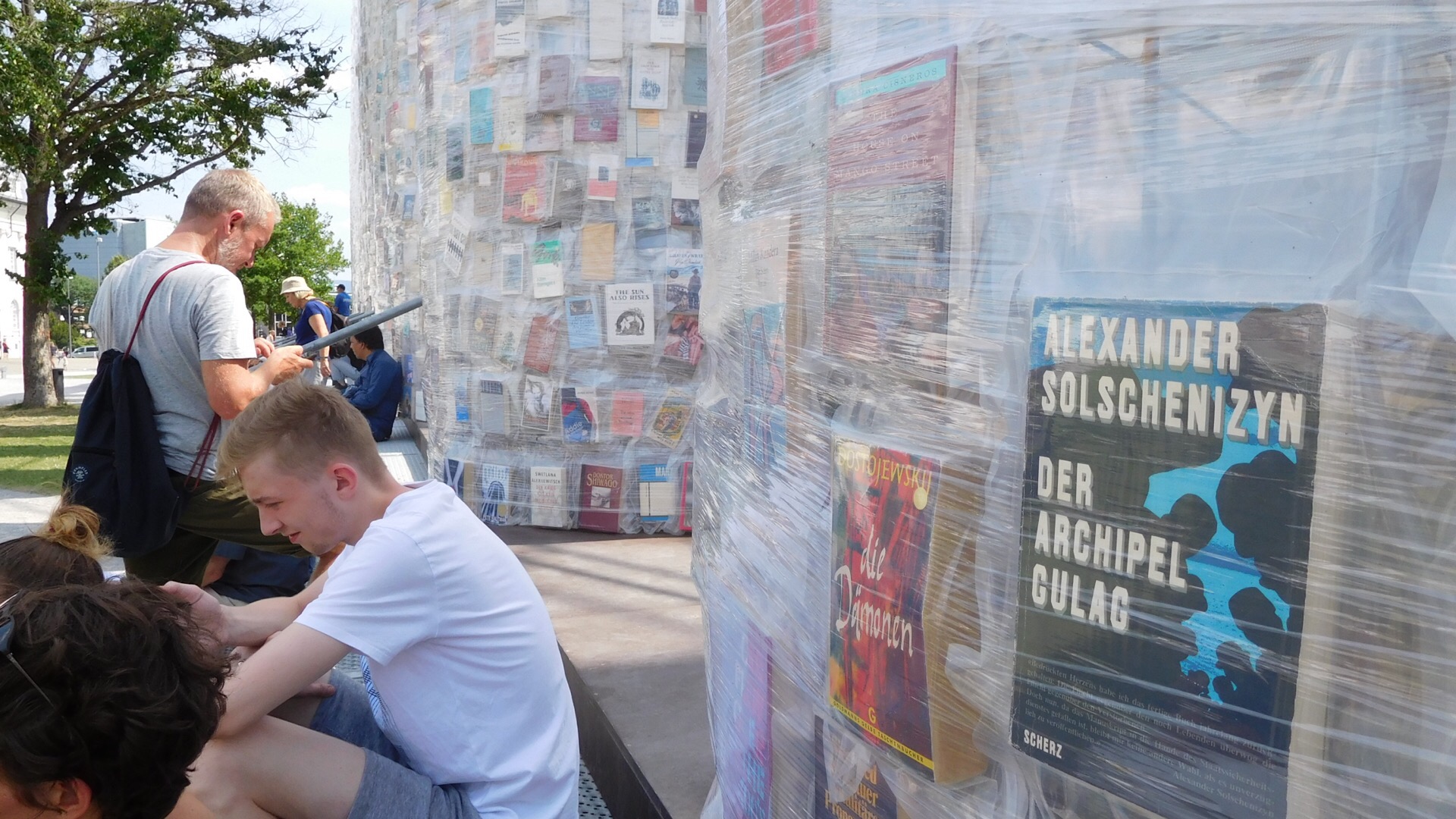 Marta Minujin: "Parthenon of Books (2017)" next to the Fridericianum. The artist built the first such Parthenon in 1983 in Buenos Aires with books which the Argentinian military dictatorship had confiscated and kept in cellars until the country returned to democracy. The building refers to the first democracy in ancient Greece and its ideal. 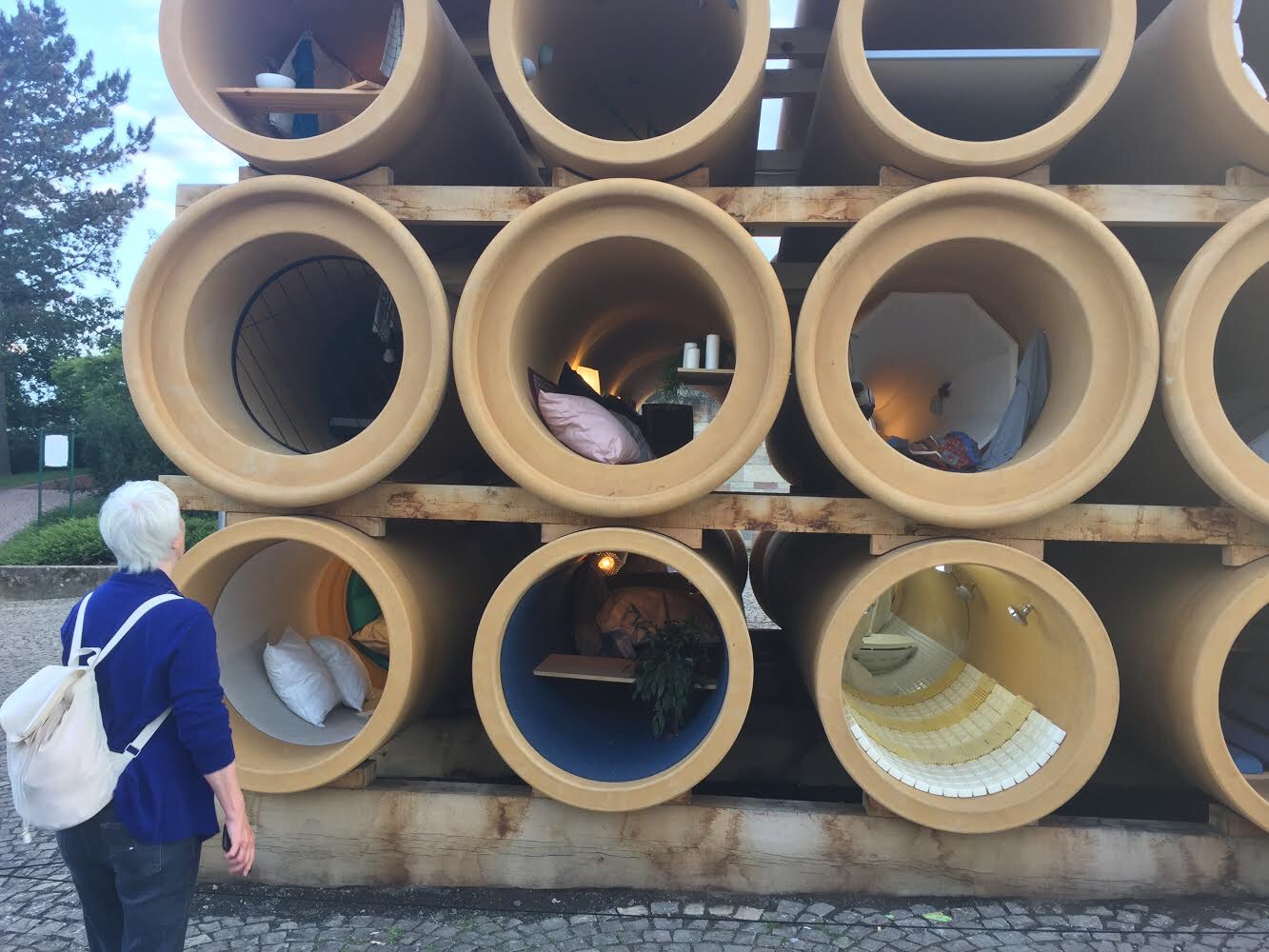 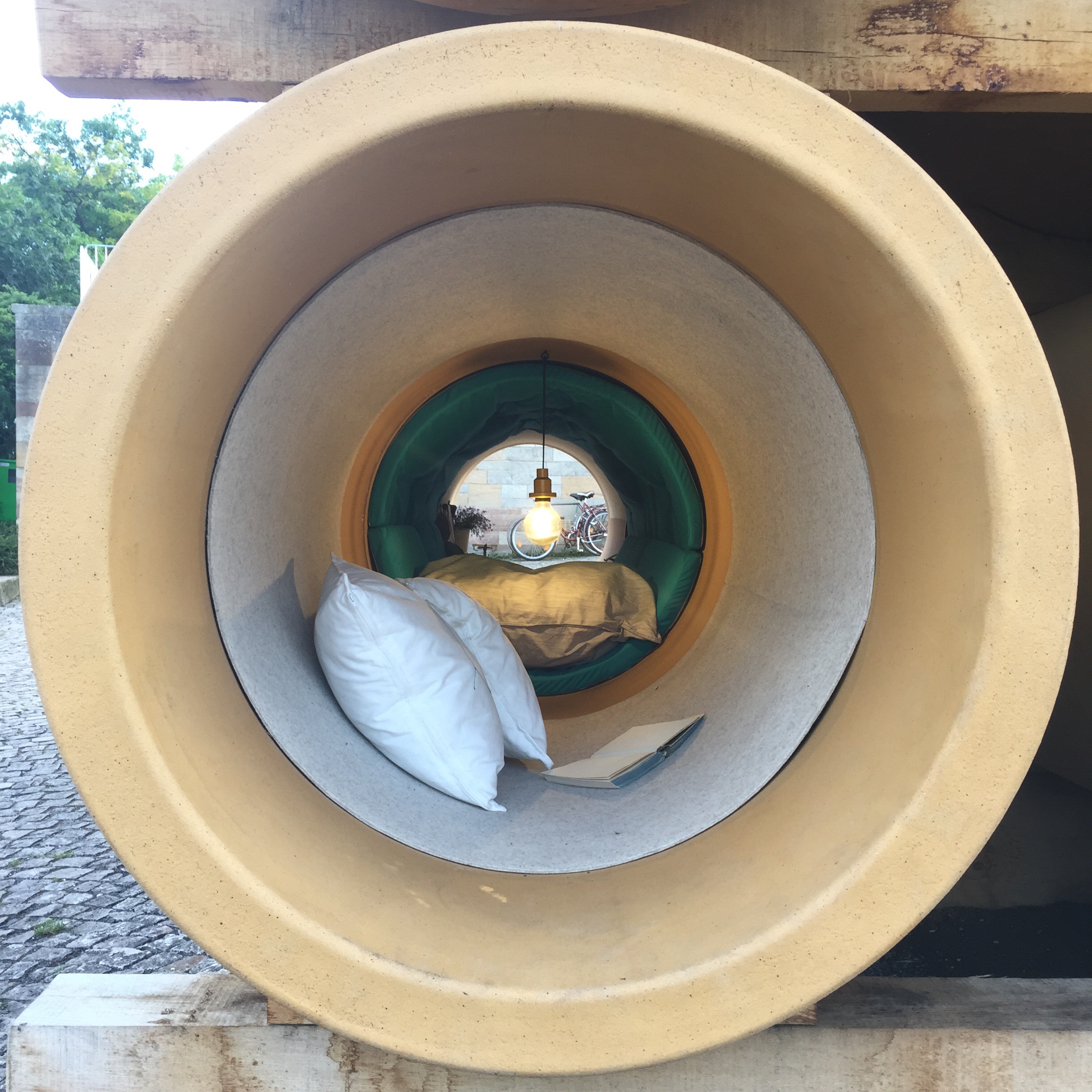 Hiwa K (*1975 in Sulaimaniyya, Kurdish Iraq): "When We Were Exhaling Images" in front of documenta Halle. 20 sewage pipes in 4 rows above each other are furnished as apartments including a bathroom, a herbal garden, kitchen, desk for Japanese calligraphy and of course beds. The artist or a friend of his spend a part of their escape from Iraq in such pipes. According to an interview with RBB https://www.rbb-online.de/kultur/beitrag/2017/06/berliner-kuenstler-hiwa-k-bei-documenta.html the artists sees life in horizontal instead of vertical also as critique of societal vertical hierarchies and as reminder to consumers to reduce to the real needs, since a pipe does not allow much space and makes it difficult to discard waste without loosing already scarce space.

Haunted by a leopard tank 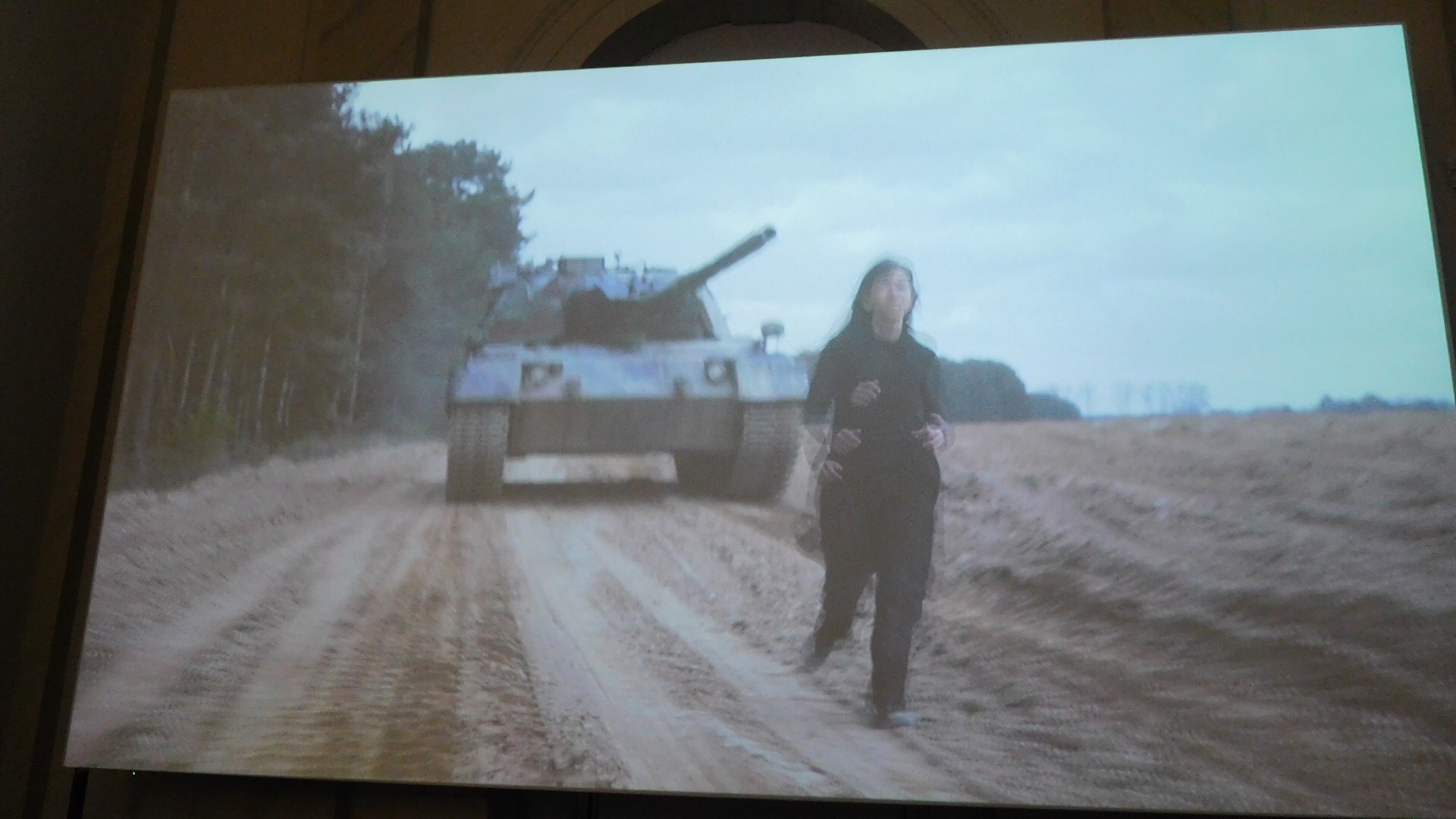 Regina José Galindo: "La Sombra (The Shadow, 2017)" in Bellevue/Neue Galerie 2. The 11 min video performance with Leopard tank is simple but the resulting image is strong. The video supplied the only strong postcard I could find. Like a shadow, the tank follows the artist who runs herself across what looks like a military testing area. The tank is obviously not at full speed, follows her dangerously close but never really gets too close. Her description refers to arms exports from rich countries to poor ones in conflicts, including in the Americas. This can connect well with Kassel as one of the centers of German military production. Less directly, it can refer to the German past of the Nazi era that still follows like a shadow. 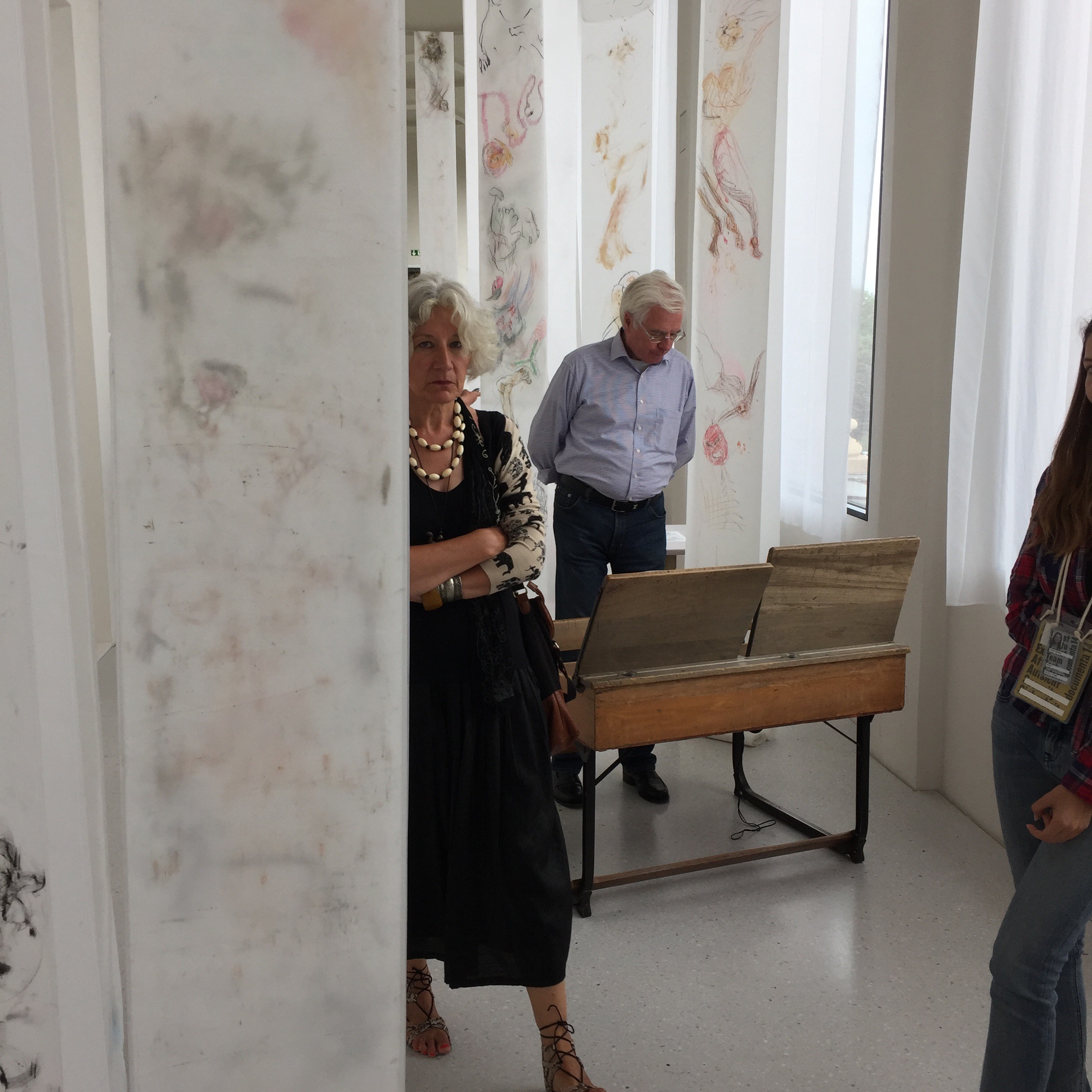 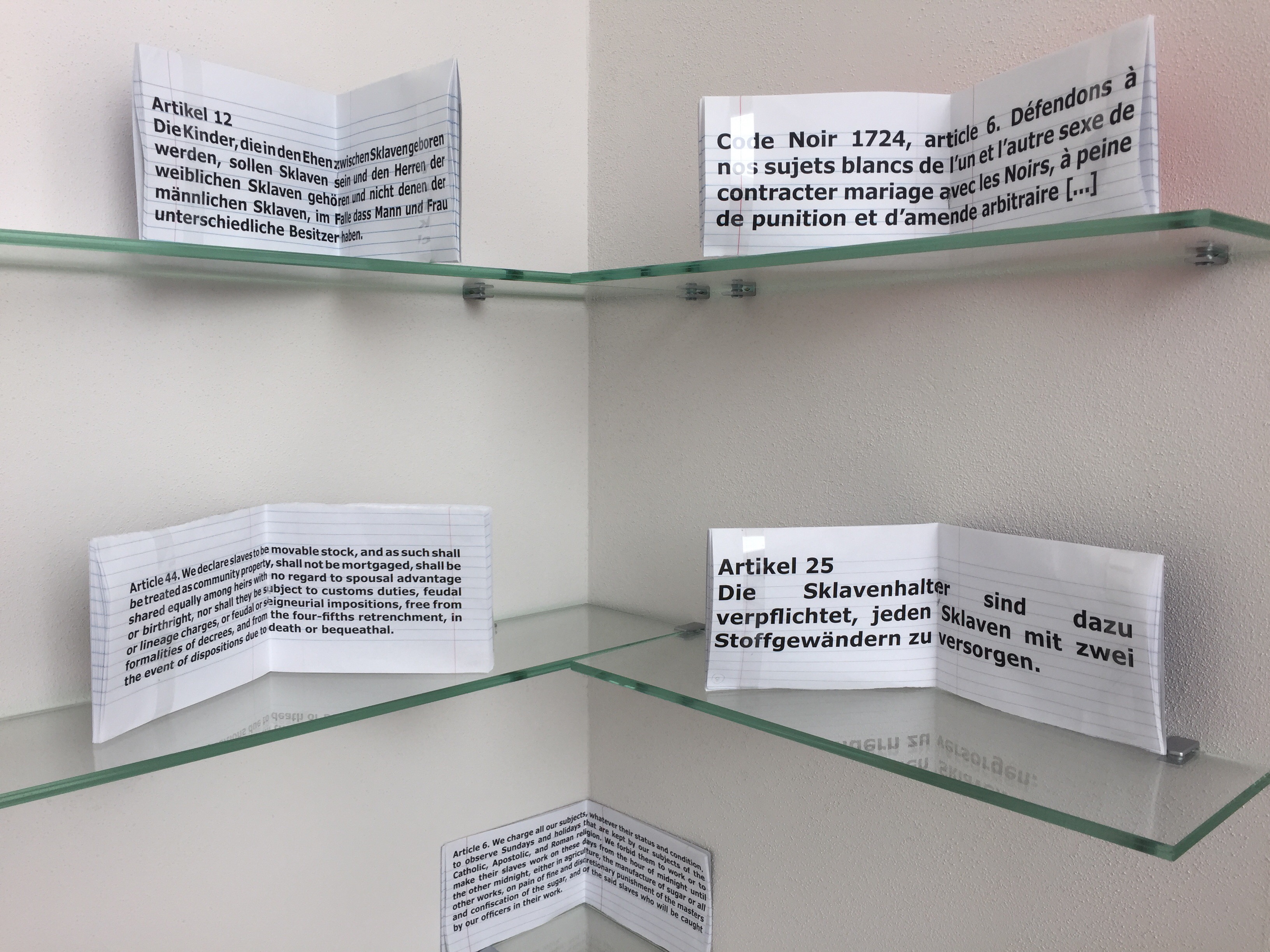 Pélagie Gbaguidi (*1965 in Dakar, living in Brussels): The Missing Link. Dicolonisation Education by Mrs Smiling Stone (2017) in Neue Galerie, ground floor. School furniture, photographies, long paper bands with drawings hanging from the high ceiling and papers with text in a glass shelf inform about the Code Noire. This French law by king Louis IVX from 1685 regulates how humans are enslaved, their ownership and trade including legalising forced labour, rape and killing based on black skin colour. It takes until 1848 for France to abolish this law, well beyond 1789. The artwork probably wants to be the "missing link" between rich European and less visible African art. Personally, I cannot connect well to the drawings based on unlearning artistic techniques to achieve results closer to the supposed innocence of children. In this case, the political purpose for me overrides the lack of fascination by the artwork itself. Yet, the bright papers filing the long space set the cruel texts citied from the Code Noire in a good perspective to let it sink in how colonialism affects all societies involved deeply until today.

A bookshelf of shame for justice 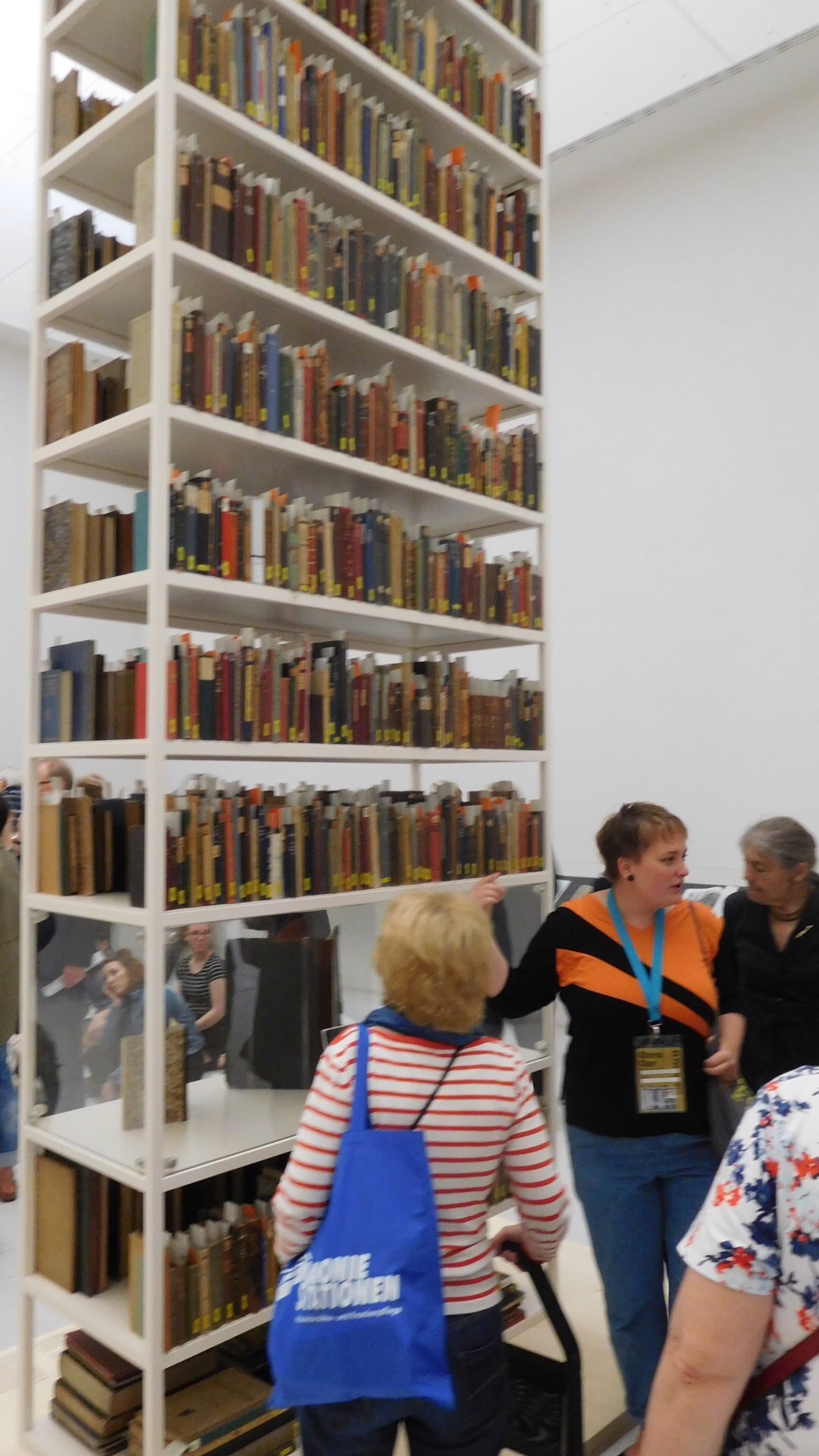 Maria Eichhorn: "Rose Valland Institute (2017)" in Neue Gallerie incl. "Unrechtmäßig aus jüdischem Eigentum erworbene Bücher". The artist is concerned with restitution, to try to give back stolen art to their rightful owners, here mostly property of Jews either stolen or forcefully bought during Nazi rule. The most eye-catching part of the artwork is a shelf full of books taken from Berlin's State Library where I works for months on my graduation thesis. These books are all labeled "nicht entleihbar" (cannot be borrowed) since their ownership is unclear or disputed. For a book lover like me this shows the consequences of slow restitution in a painful example of interesting books which become inaccessible.

Feminism from Pakistan of the 1980s 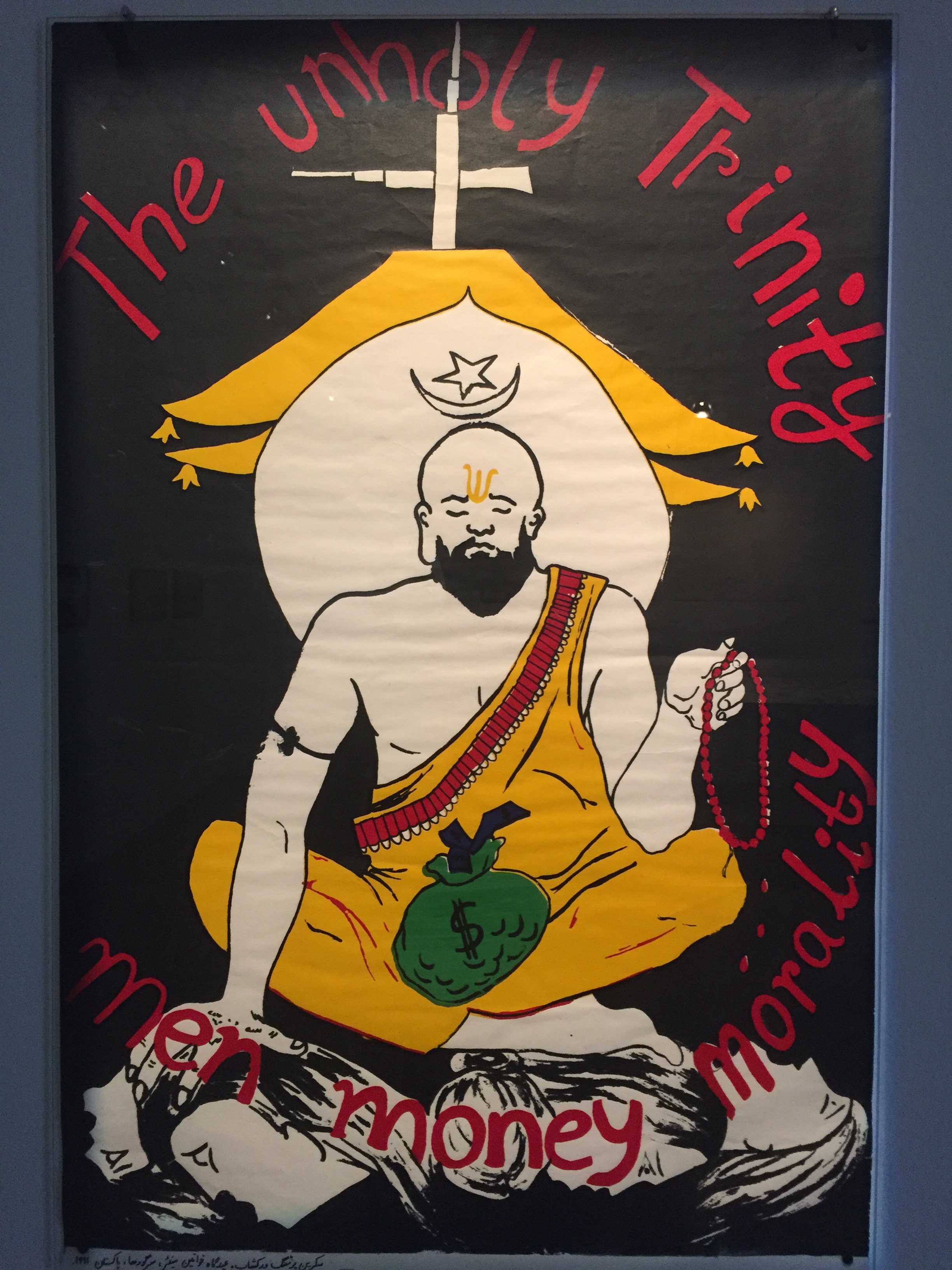 Lala Rukh: Posters, flyers, screenprinting manual, and other materials relating to the Women's Action Forum, Lahore (1980s-90s) in documenta Halle including "The Unholy Trinity (1986)" and "Crimes against Women (1985)". While in European debates too often Muslims are generally dismissed as anti-feminist, it is beautiful to see how feminists already fought 30 years ago for women rights as far away as Pakistan. 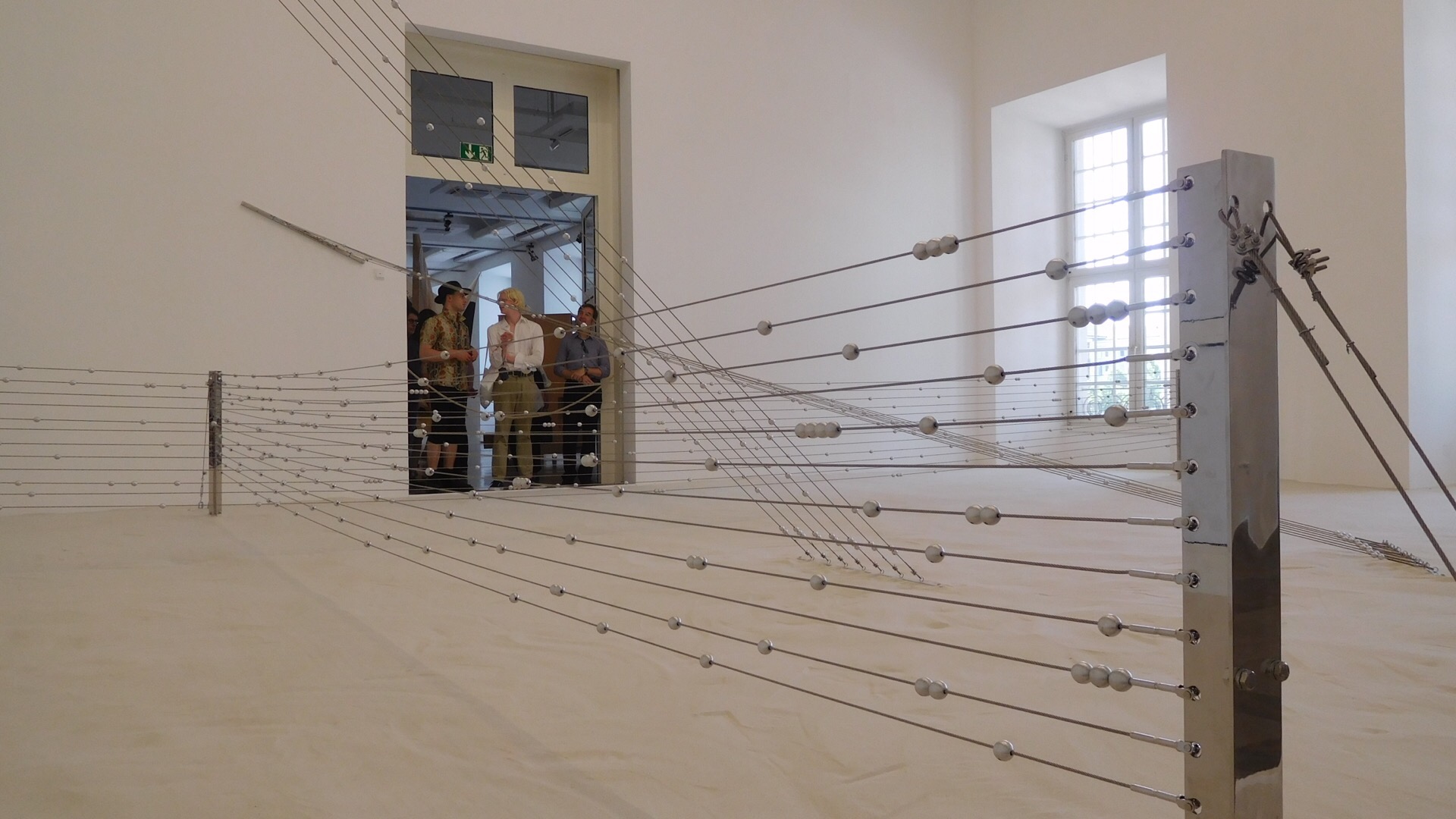 George Lappas: "Abacus (1983)" in Fridericianum ground floor. The installations is made up of parallel metal ropes with some metal balls fixed on them. They span accross sand on the ground a bit like the net on a tennis court and in other forms. The balls on the ropes form something that could be a help for calculation alike an abacus as the title suggests yet also musical notes. To me, the notion of calculation and the proximity to many artworks on migration and the similarity of the metal net to a border fence rather suggests the double sided issues on regulating migration by point systems. The symmetry and simplicity of this work evokes a peace which it starts to question again.

Immigration as a game for grown ups 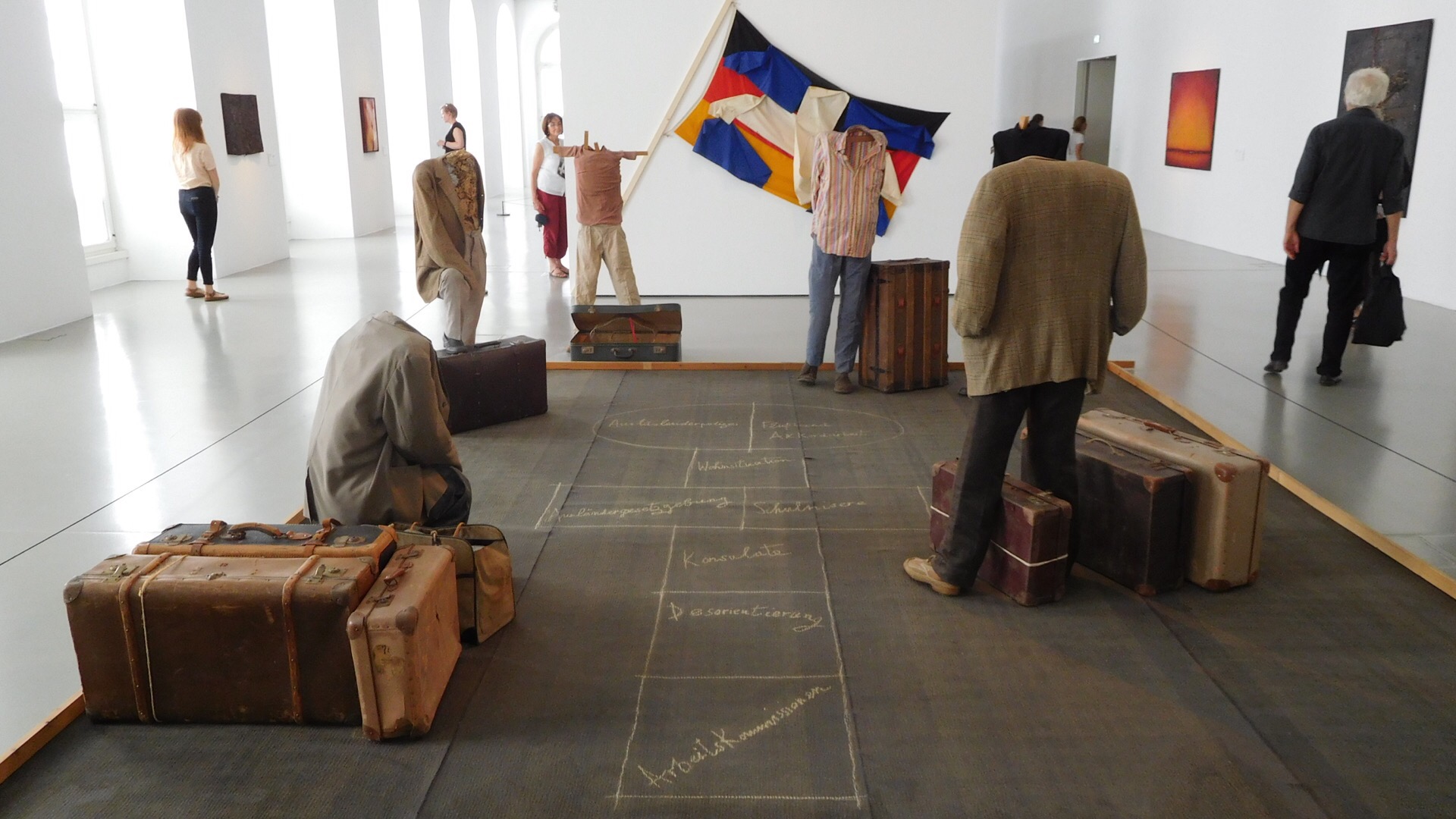 Vlasis Caniaris: Hopscotch (1974) in Fridericianum ground floor. The installation shows used cloth and suitcases of immigrants around chalk boxes on the floor like in a children jumping game. Caniaris does probably not suggest that migration would be as easy like children game. Migrants rather feel in many of the described institutions treated like children, spending time as purposeful as in games. Also, winning new chances in the life far away from the old home requires the skills to navigate through the institutions as children need skills to jump through the boxes in the right order.

An ode to the vacuum cleaner 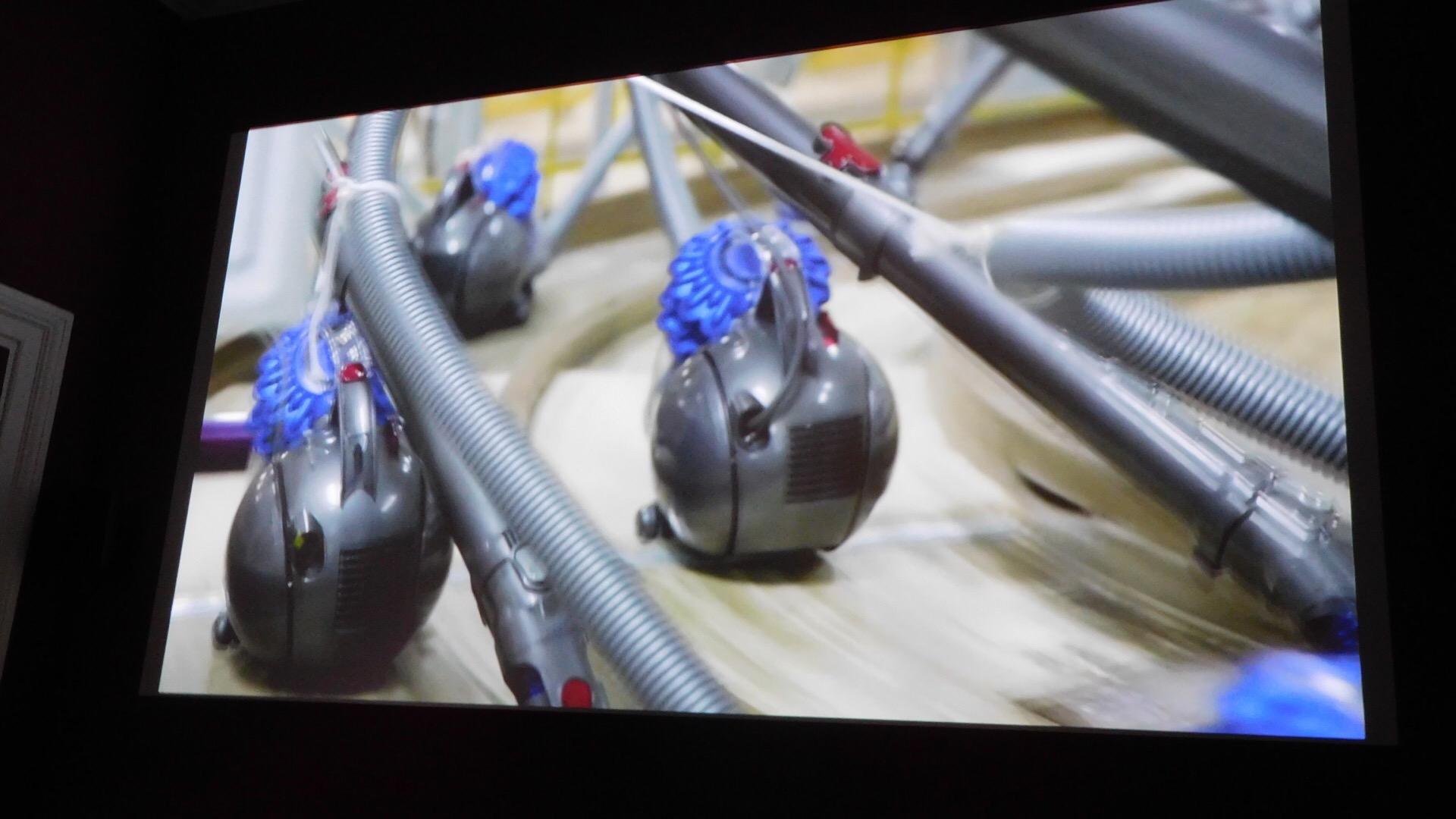 Roee Rosen: "The Dust Channel" in Palais Bellevue, 3rd floor. The video shows the praise of vacuum cleaners and how refugees are seen as dirt. It criticises the obsession of the Israeli majority society with being clean and pure which extends into racist treatment of everyone who is not white or Jewish. Careful: You have to wait in line to get into the next level of the building. If you do not have plenty of time: skip it.

From fasting Buddha to the Bengal famine of 1943 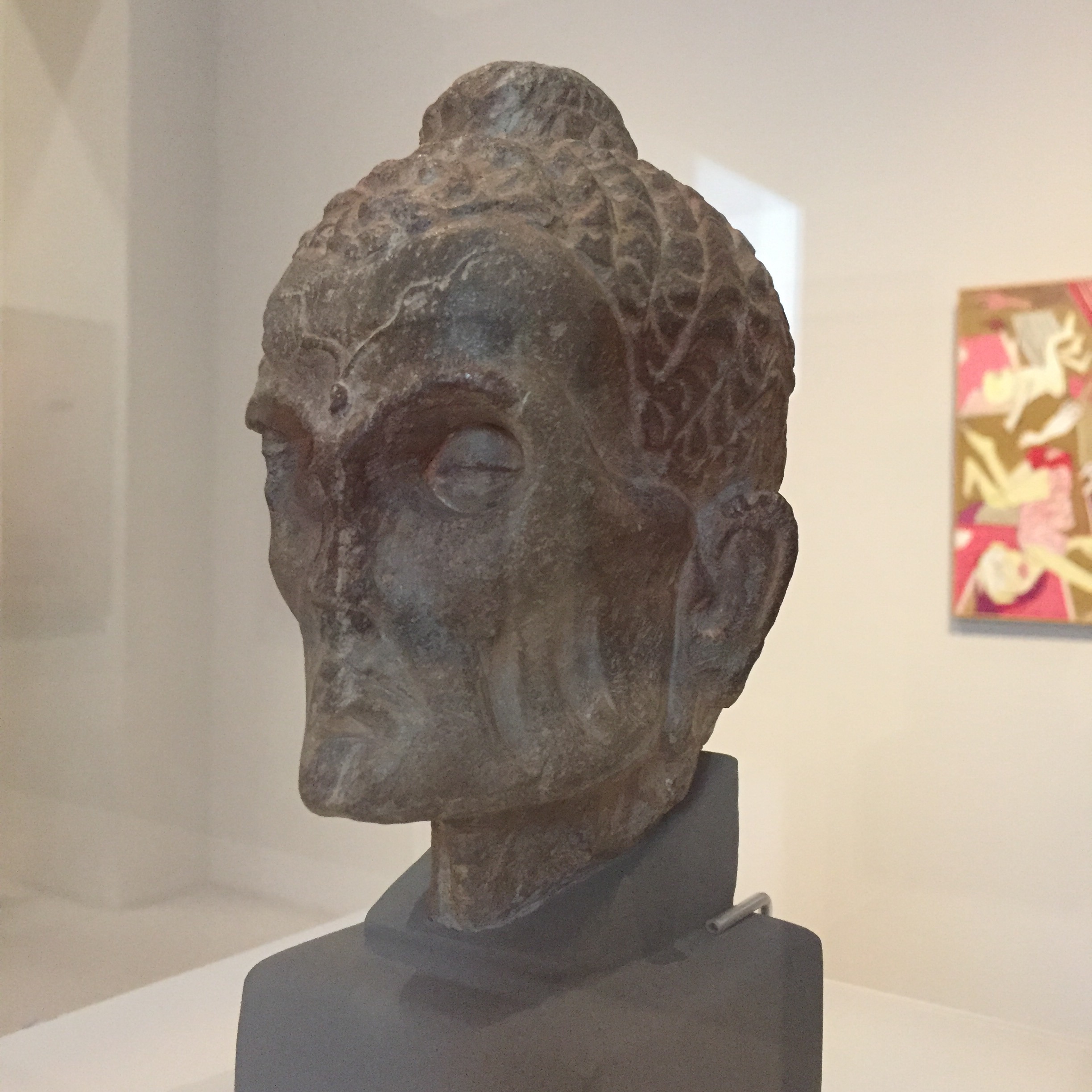 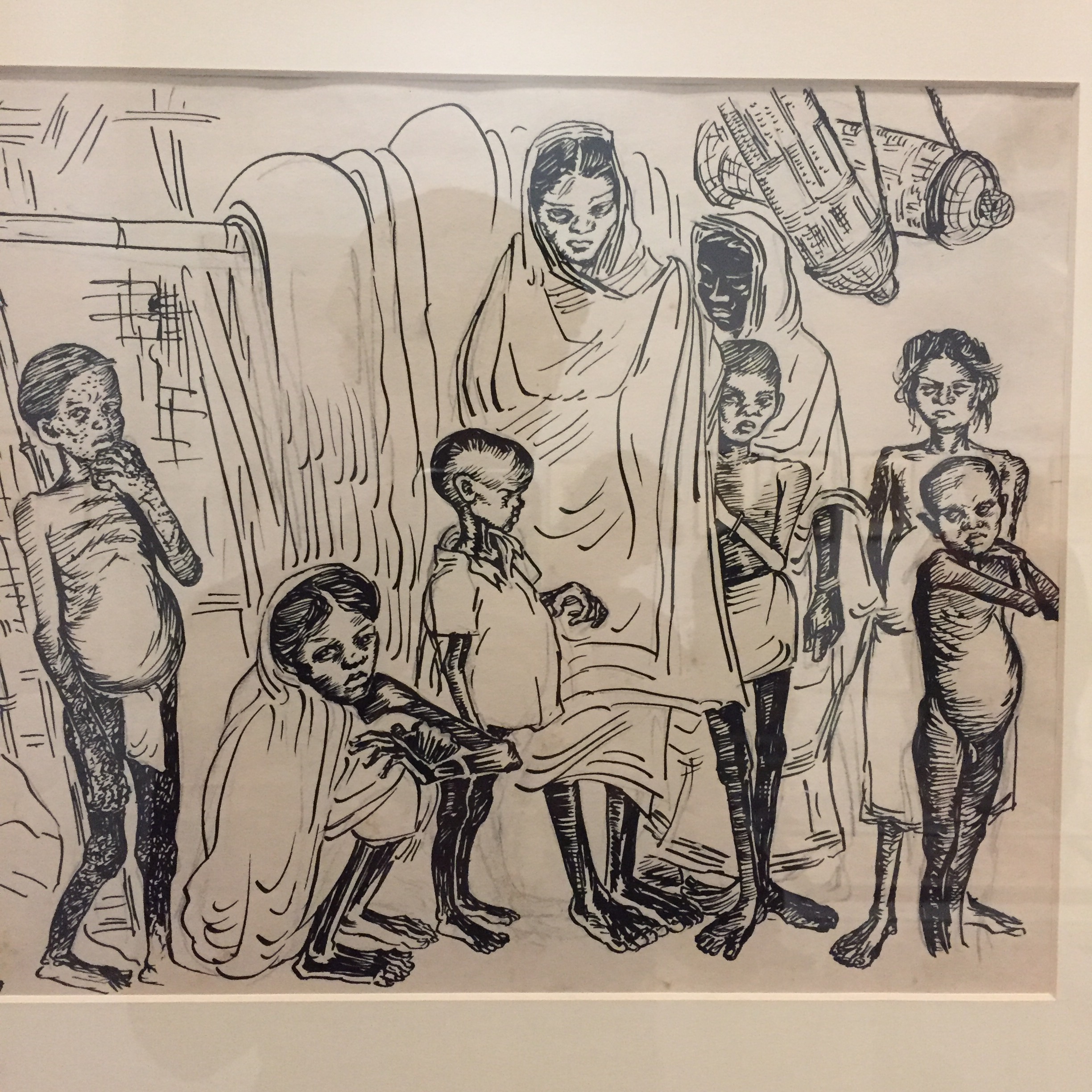 The ground floor of Neue Galerie hosts another thematic collection opened by a fasting Buddha from around 200 before Christ and leading to the Bengal famine of 1943 in British India which caused around 2 million deaths by starvation and subsequent diseases. Diverse analysis of causes as presented in https://en.m.wikipedia.org/wiki/Bengal_famine_of_1943 includes decisions of the British war cabinet to prioritise the needs of the British army fighting Nazi Germany over the needs of the starving rural poor. The famine contributed to a change of world opinion on colonialism and helped to free not just India from foreign rule. Art displayed is either too antique to be modern or impressive much more politically than artistically. Yet, this collection connected important dots from my own visit to West-Bengal in 2006, school knowledge about the 2nd World War and anti-colonial convictions.

Dreams woven into a bedsheet 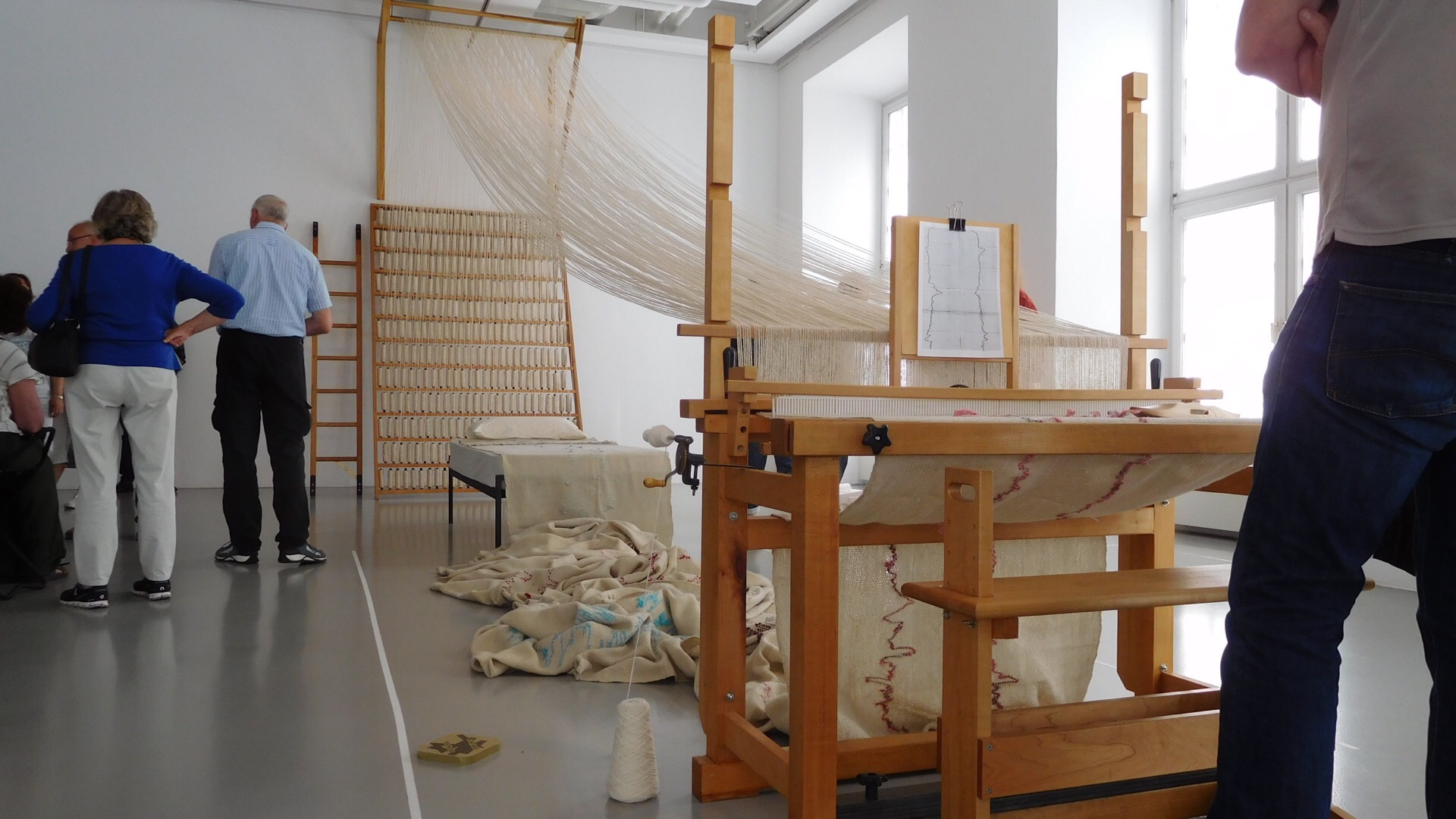 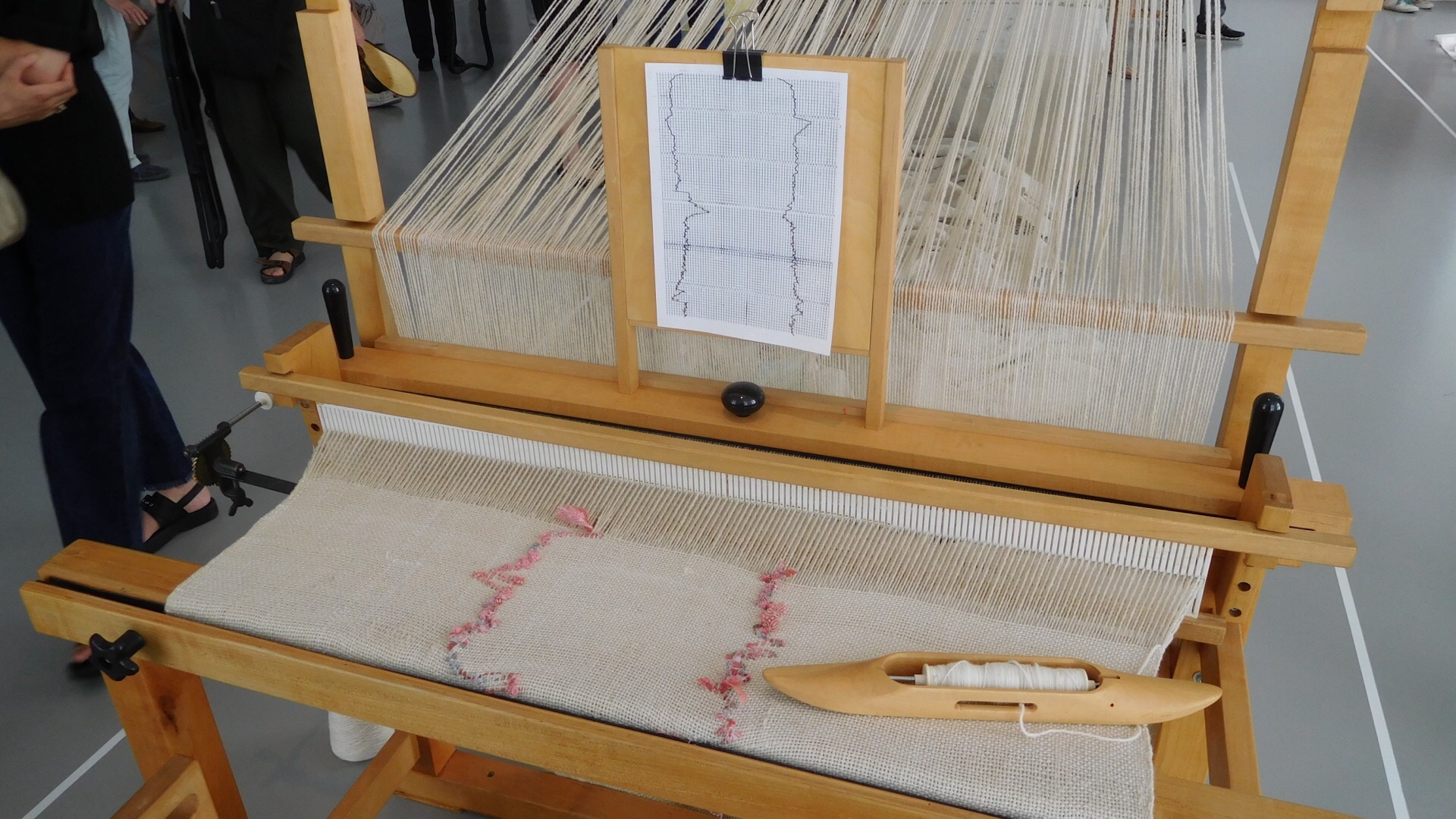 Janine Antoni (*1964 in Freeport, Bahamas): "Slumber (1994)" in Fridericianum ground floor. The artist slept at in a bed while her eye movements were recorded as REM diagram by a machine. At day she transposed the diagram into a woven bedsheet ending up on the same bed. While this seems largely a beautiful but not a political idea, sleep is essential and the beauty of this artwork lies in its meditative quality.